HOW WE BECAME A GROUP
In 2016, we Omsenkyo (Satomi and Wataru) met Arindam at the yoga festival in Okinawa. At that night, we had a little session in the room we shared, then all three felt WOW!. The music we played was really a something!, it seemed like a perfect trinity. Melody, rhythm and the sound of drone, which is the same form of Indian classical music. But! different!. We have Okinawa’s folklore and Japanese sound therapy combined with Indian percussion all in one!.

WHY WE PLAY
We will bring peace to your mind.
When you live in peace, the world is in peace immediately!.

WHAT WE DO
It is a combination of entertainment and sound treatment.
We provide positive vibes, and sweep away negative vibes powerfully.
Just have a fun with the music, then you’ll feel better.
Make miracles as usual sort of things.

Concert in India.
0:00. Leave anger in the silence.
1:05. Shooting stars.
Both are composed by Wataru Kousaka and arranged by Omsenkyo project. 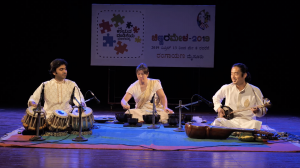 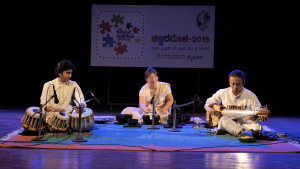 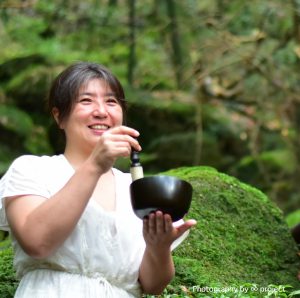 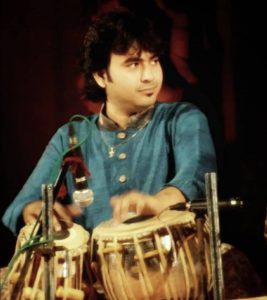 Satomi Kano
Singing-ring player / Sound therapist
Started the career as a singing-ring player in 2005.
After several musical experiments with some musicians, established Omsenkyo with Wataru Kousaka.
Her powerful sound changes the history of the sound of drones from just a continuous accompaniment into the experience of the vibration of bliss.

Arindam Chakravarty
A young and versatile Tabla Player was born in a Music loving family of Kolkata.He was initiated in Tabla by his parents at the early age of five under the able guidance of Acharya Pandit Shankar Ghosh and has continued taking lessons from him for Twenty Six Years and is a “Ganda Bandh” student of Panditji.Arindam is a promising Musician of his generation of Farukhabad Gharana. He also took lessons in Carnatic Percussion Music from Vidwan S.Sekhar.
https://www.arindamtabla.com